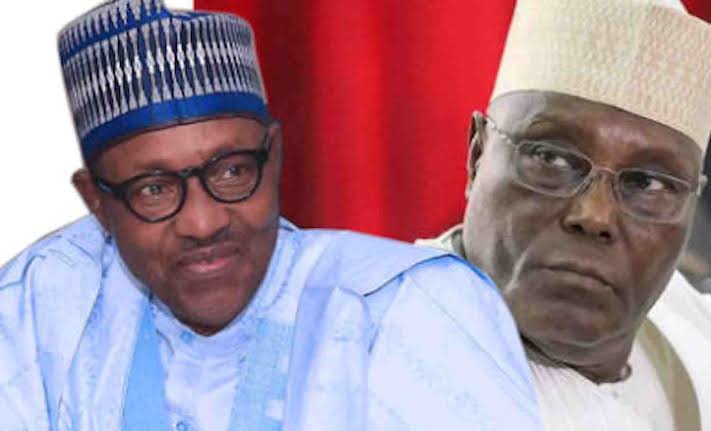 Presiding justice of the presidential election petition tribunal, Justice Mohammed Garba, just led other members of the panel into court to deliver the verdict on Atiku’s petition against Buhari’s election. Other members of the panel are, Abdul Aboki, Joseph Ikyeghi, Samuel Osiji and Peter Ige.
9:26 AM
Also in court now is National Chairman of the PDP, Chief Uche Secondus, PDP chieftain and Chairman of DAAR Communications PLC, Chief Raymond Dokpesi
9:06 AM
Former EFCC chairman, Nuhu Ribadu, and Minister of Labour and Productivity, Dr Chris Ngige, just arrived.
9.06 AM
Other dignitaries who just arrived include; Attorney General of the Federation and Minister of Justice, Abubakar Malami SAN, National Chairman of the APC, Comrade Adams Oshiomhole,  cousin of President Buhari, Mamman Daura, minister of Works and Housing, Raji Fashola.
9.04 AM
Lalong, Kyari, Keyamo Among Dignitaries in Court
By Alex Enumah in Abuja
The governor of Plateau State, Simon Lalong, Chief of Staff to President Muhammadu Buhari, Abba Kyari, and Minister of State for Niger Delta, Festus Keyamo SAN, are among the early dignitaries in court for the judgment of the Presidential Election Petition Tribunal billed to commence any moment from now.
The five member panel headed by Justice Mohammed Garba had Tuesday announced that it would deliver its verdict in the petition filed by candidate of the Peoples Democratic Party (PDP), Atiku Abubakar against the election of President Buhari.
Atiku and his party, the PDP had dragged the Independent National Electoral Commission (INEC), Buhari and the All Progressives Congress (APC) before the tribunal over alleged electoral malpractices, violence amongst others.
In the petition filed on March 18 they are asking the tribunal to annul the victory of Buhari on grounds that the election was rigged in his favour.

They also asked the tribunal to sack Buhari on grounds that he was not qualified to have contested the election in the first place having not possessed necessary academic qualifications for the office of President.
8.40 AM
Security Beefed up Around Appeal Court as Tribunal Delivers Judgement in Atiku Vs Buhari Suit
Security was beefed up on Wednesday within the vicinity of the Court of Appeal, Abuja, as the Presidential Election Petition Tribunal delivers judgment in the petition filed by Peoples Democratic Party (PDP) and its candidate, Atiku Abubakar challenging president Muhammadu Buhari’s victory in the Feb. 23 general election.
Security personnel comprising mainly men of the Nigeria Police, the Department of State Services and the Nigerian Security and Civil Defence Corps mounted security checks at both ends of the stretch of the road to the court.
According to the News Agency of Nigeria, Lawyers and journalists who arrived the court premises located in the Three Arms Zone, were subjected to checks by security personnel.
The tribunal had on Aug.21 reserved judgment in the petition after parties adopted their addresses.
Justice Mohammed Garba, Chairman of the five-man panel of justices, had stated that the judgment date would be communicated to parties.
President Buhari was declared winner of the election after scoring 15,191,847 votes as against Atiku’s 11, 262,978 votes.

I knew it before

I knew this was going to happen

I saw this coming

That's was too harsh

I new it Will be in favor of president Buhari

So we can now go home now

Where are men of integrity and honor like heroes of the past ?

I knew it before

So last last they’ve declared him a winner

This is Nigeria. Whatever the outcome of the tribunal's verdict, it has been predicted by all sensible Nigerians before today...