I Bought Cars For All My Male Workers - Apostle Suleman

Suleman revealed this in a tweet on Monday while addressing poor treatment of staff by employers of labour.

President of Omega Fire Ministries Worldwide, Apostle Johnson Suleman, says he bought cars for all the male workers in his privately-owned television channel.

Suleman revealed this in a tweet on Monday while addressing poor treatment of staff by employers of labour.

He said: “I have a TV channel. I bought cars for all the male workers not car loans but car gift. Nobody stays with a man who lacks human feelings. This is why some ‘big men’ die strangely. It’s because their workers are in pains, prolonged pains.”

The fiery preacher added: “Just saw a whole family tell me that they haven’t eaten for days. The governor hasn’t paid them for over 10months and he wants to come back? To do what? See how pale the kids look. May the Lord reward all of you wicked politicians.

"Any man who refuses to pay his workers would face the judgement of God. I have had staff for 15years and never owed salaries one day. Even when the company runs on deficit, I do my best to pay. Workers welfare is key for business health/growth." 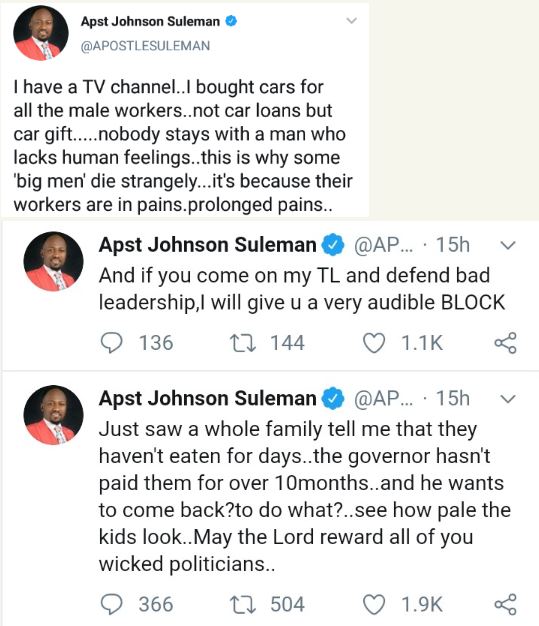 As a pastor u ar
(Quote) (Likes)
Aghaulor Precious

This can of man Nigerian need at the moment

Well he has money, rich pastor

You u definitely deserved my Admire and likessssssss

That is good. Others should emulate him.

its fine by you so God bless you

Do you need more workers

Car is not empowerment. There are so many widows and orphans around empower them and God will bless you more

The Greatest Enemy Of Man Is Not The Devil But Self. Read More

How Christians are persecuted in Nigeria — Christian group Read More

Fact about Iraq you need to read it Read More

Mbaka may be banned from preaching. Read More