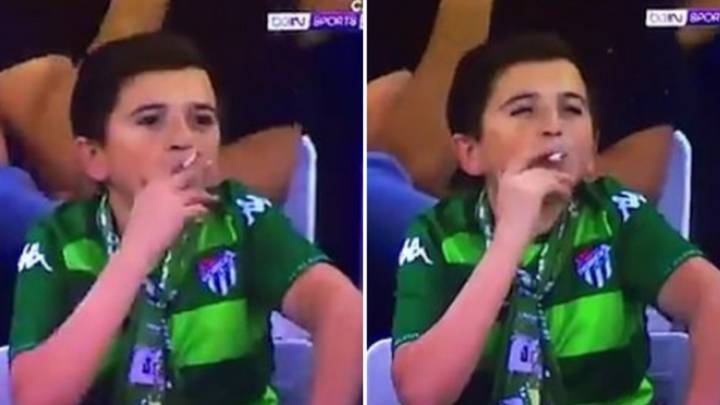 On Sunday, a Turkish football fan went viral after cameras picked up him smoking a cigarette in the stands prior to Bursaspor's 2-1 win over Fenerbahce.

The supporter, proudly wearing his Bursaspor shirt and scarf, looked like no older than 10 years of age but was still enjoying a drag as he sat next to a youngster in the crowd at the Timsah Arena.

Literally everyone thought that it was a minor having a pre-match toke but News 1 say that the individual in question is in fact a 36-year old man - and the person next to him is his son as opposed to being his mate or younger sibling.

It really is quite the plot twist and we're in doubt that this fella has to take his ID wherever he goes because he definitely does not look his supposed age.

Him lighting a cig is obviously a lot less concerning now we know he's not far off 40 but smoking in public places, including sports stadiums, is banned in Turkey and can carry a £13 fine.

Oddly, it's not the craziest thing we've seen in the stands in a football game.

In a clip that did the rounds on social media back in August a 2017, a female supporter in Paraguayan can be seen snorting some cocaine in the stands - in celebration that her team has just scored.

The boy is our future leader smoker

Long story without a Norma landing

The boy is small..

While smoking is not good

Small is good for our selve
(Quote) (Likes)
Otiky Isong

This world have change

That's definitely treat him to be disobedient boy

How a footballer has managed epilepsy and still remained at the top of his career is one of the most surprising and motivating story one could have. Read More

Arsenal of England playmaker, Bukayo Saka has drawn the ire of one of The Gunners’ legends Read More

Former Barcelona, Chelsea, and African footballer of the year, Samuel Eto’o Fils has disclosed the major reason for his undying love for Nigeria Read More

"“Guardiola was cruel with me. Do you think he could have done that to Iniesta at Barcelona?" Read More

Real Madrid where beaten by an impressive Manchester city side at their home ground on Wednesday night. Read More