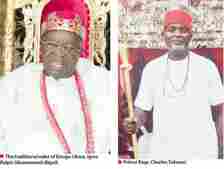 Battle of supremacy over seniority rights is fast eroding the brotherly bond between Enugu-Ukwu and Agukwu Nri, two communities in Njikoka and Anaocha local government areas of Anambra State.

Each community is laying ​claim to the rights of the firstborn child among the sons of  Eri dynasty.

This came to the fore recently when the traditional ruler of Enugu-Ukwu, Igwe Ralph Obumnemeh Ekpeh,​ adorned in his royal ragelia, read an address at the inauguration of their new ‘Obu Okpalanakana​ ‘Isi-Nri Museum’ and it  was  perceived as an affront, demeaning and antithetical to Nri kingdom.

The traditional ruler said, “Agukwu has usurped the place of the son of Nri, Okpalanakana-Ukabia Nri. In​ doing this, they should not forget to accord respect to the first son of Nri. A quick realisation of this and cooperation would help Nri kingdom to restore its place in history. 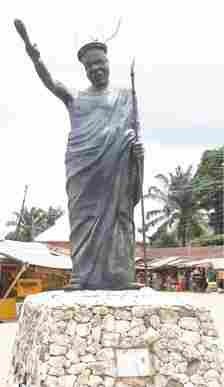 “Together we shall move mountains, but in rancour, disintegration and incoherent achievement would be the consequence.’’ He, however, added that he could not stop commending the effort of Agukwu in preserving the glory and artifacts of Nri.

Also speaking, the traditional minister of culture in Enugwu-Ukwu, Chief Jude Ekwunife, said the community was the first son among the children of Nri, who was one of the sons of Eri.

“Nri, who migrated from Aguleri, spent most of his active life at a spot known as Nkpume-Onyilienyi in the Ugwu Awovu area of Isionye quarters of Enugwu-Ukwu.

“It was while sojourning at Nkpume-Onyilienyi that Nri begot Okpalanakana, the revered father of Enugu-Ukwu,’’ Ekwunife said.

According to him, Nri​ is the oldest kingdom in Nigeria as it  came into existence in 900 AD. The next is Kanem Bornu Empire, which also started in the mid 900 AD.​

​ “It was anthropologically researched and​ universally acknowledged that the ancient Nri Kingdom is the ancestral home of Ndigbo and the custodian of Igbo culture and traditional values,’’ he said.

In reaction, Prince Charles Tabansi, an engineer and the former president-general of Nri Kingdom and great grandson of a former Nri king, Eze Nri Tabansi Udene Nrijiofor from Agukwu, frowned at statements by men of Enugu-Ukwu, especially the use of the word, ‘usurpation.’

“It is obvious from the many utterances of prominent men of Enugu-Ukwu and now the big ‘masquerade’ himself, the Igwe, that our brothers there have lost sense of their history,’’ he said.

Tabansi said the children of​ Eri were made up of​ Agulu, Ogbodudu, Onogu, Iguedo (female), Onuoja and Menri, adding that Eri was a very spiritual and mystic man with great charisma.

He said Menri inherited his father’s spiritual powers and mysticism but decided to distant himself from such practices; hence he started wandering under supernatural influence. He said Menri’s first port of call as a wanderer was Amanuke, then Ugbenu and later, Ugwu Iru Okpu or Mkpume Onyilenyi at Enugu-Ukwu.

“At this time,​ Menri was under the inspiration of the spirits and was behaving abnormally. Because of his delay in taking the powers of his father, Eri and taking the title of Nri (the highest title that could be taken in Nri ) as sanctioned by Chukwu (God) and the ancestors, calamity struck him and he started losing his children mysteriously. First to die was Okpalanakana, followed by Ariam, then Umenekanu.

“Menri was still under spiritual torment, so he left Osili and migrated to the valley of Agulu lake, where he founded a new settlement called Agukwu, the name the area was called because of its thick forest.

“At Agukwu, he finally took the title of Nri and became Eze Nri Ifikwuanim, the first Eze Nri of Agukwu. Normally, when one takes the title of Nri, one takes a new name after his symbolic ‘death’ funeral rites and ‘resurrection,’ which occurs during coronation,’’ Tabansi said.

He further said that during this symbolic death, his wives would mourn him as if he was really dead. After his resurrection he takes a new name and marries new wives. This was what happened to Menri, according to history.

So, after his symbolic resurrection, he took the name of Nri Ifikwuanim and married two new wives, who gave birth to Onyiora (progenitor of Agbadana); Alike (progenitor of Uruoji); Ogboo (progenitor of Obeagu) and Odili, who died early and his brother from the same mother, Onyiora, took custody of some of his children (Uruanata kindred of Agbadana).

His wife, who hailed from Orji village in Enugu-Ukwu, went back to her people with some of the very young among Odili’s children, who grew into Urunebo of Enugu-Ukwu.​

It is said that Urunebo descendants have a strong brotherly tie with Agukwu Nri and were the ones​ doing all the traditional and spiritual jobs in Enugu-Ukwu in the absence of Nri people, who are exclusively responsible for performing rituals like spiritual cleansing (Ikpu Alu)​ and​ Igbaye Atali (granting the Nze title).

Nri Ifikwuanim equally built marriage ties with the aborigines he met. In the south, he met Akamkpisi people, led by one Ezikanebo, who he gave his daughter in marriage.

In the northern side of Nri Kingdom, Diodo people, his cousins, who are also descendants of​ Eri, were led by a man who had also taken the Nri title and called Nri Namoke na Ogbodudu.

Nri Ifikwuanim further took​ Namoke’s​ daughter in marriage for his third son, Ogboo, which formed the basis for the unity that prevailed among the three sections into one town, Nri.

According to Tabansi, “From the above history, it is obvious that Enugu-Ukwu cannot claim to be Nri because their progenitor, Okpalanakana was born before Menri became Nri.

“So, even though in reality, Enugu-Ukwu is Agukwu Nri’s elder brother and the first son of Menri, by the dictates of our tradition as earlier illustrated,​ they cannot claim Nri, let alone being the firstborn.

“According to Igbo tradition, if the male child of a man dies before him, he loses position in the inheritance ladder. So, being that Okpalanakana died before his father, he lost the position of Okpala of Menri and so cannot claim to be Okpala or claim right of primogeniture.

“Therefore, Enugu-Ukwu cannot answer Isi-Nri or Okpala of Menri or Nri as they are not. They cannot even answer anything Nri.’’

Tabansi appreciated the advice of Igwe Ekpeh, that both communities should come together as one​ family to protect what is theirs by extension, stressing that the four towns: Enugu-Ukwu, Enugu-Agidi, Nawfia and Nri have a common ancestry in Menri, who was better known as Nri after his coronation.

“Nri was the name known and documented by early writers. By answering Umunri, they sought to capitalise on a known quantity. The real name of the group​ should have been Umumenri.

“The name Umunri was a creation of the 1970s by people like Chief FGN Okoye, Chief R.O Nwocha (both of Enugu-Ukwu); Chief Ikeanyi, Chief Umeano (both of Enugu-Agidi); Chief F. F. B. C. Nwankwo (Nawfia); Prince R. N. Tabansi (Nri); etc. It was created to build brotherhood and common front to seek for common good.’’ he stated.

They should take it easy oh.

Make them pull over

Thats there right then they should go for it

Hmm when we are talking about covid 19

The wold is now models

What are they taking easy

They should take it easy oh

Please if its does not reach u. claim down oo

I know its not easy ,,birthright