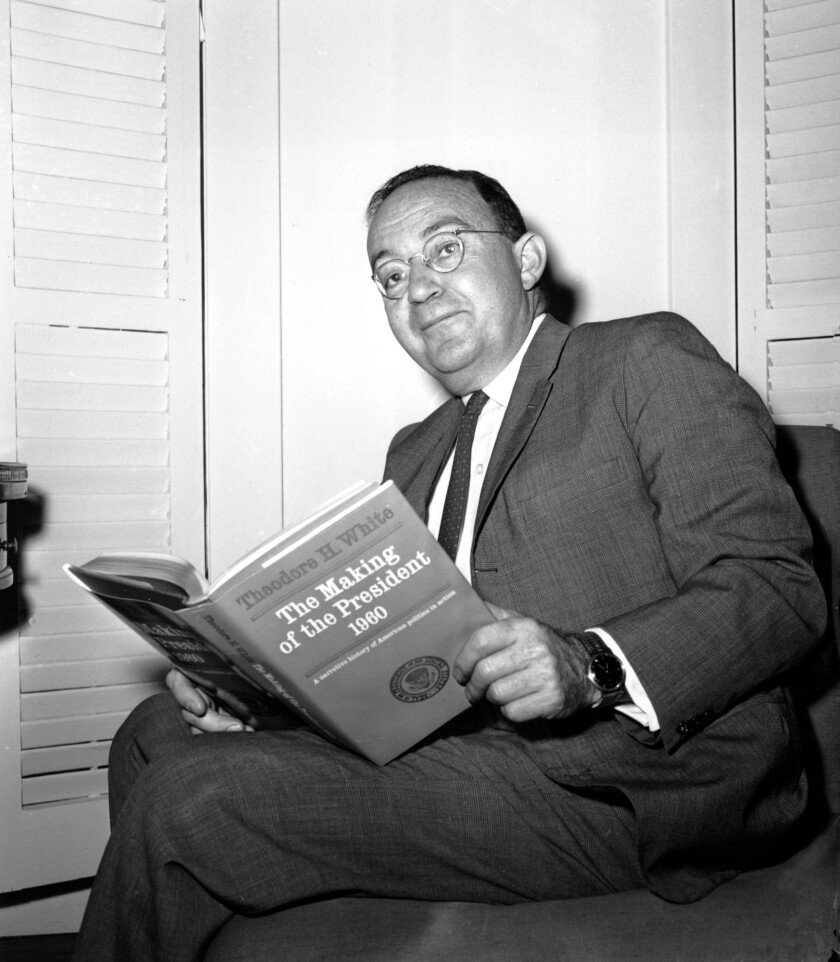 Theodore H. White poses in his New York City apartment with “The Making of a President, 1960.”

My bookshelf is stuffed with politics. There are Theodore White’s pathbreaking accounts of presidential elections, memorable for the vividly drawn scene of John F. Kennedy’s last, late-night 1960 campaign swing through New England and, more relevant to today, a dissectionof Barry Goldwater’s takeover of the Republican Party four years later. “What it Takes,” the great Richard Ben Cramer account of the 1988 campaign, still fresh with insights on Joe Biden, shares shelf space with “American Melodrama,” whose title feels timely, though it is actually an account of 1968.

Over here is Tim Crouse’s “Boys on the Bus,” about the 1972 campaign press, and over there is “Fear and Loathing on the Campaign Trail,” Hunter S. Thompson’s gonzo report on that same election. But there is no book on that shelf from recent days, nor even from this century.

Maybe it is just my age — my political consciousness bloomed in the Kennedy-Johnson years and I have covered every election since 1972 — but I believe those omissions mark the passing of the era of the great political book.

Books about politics are everywhere in 2020, but by and large, they march in a dreary parade, heavy on agendas, short on reporting, screeched rather than researched. Campaign biographies, even those, such as Pete Buttigieg’s “The Shortest Way Home,” that were actually written by the candidate, are even less inviting and less inspiring. Like their ostensible authors, they are usually historical footnotes in the making. If you bought Kamala Harris’ “The Truths We Hold” with the intention of getting to it later, you probably won’t get to it at all. If you bought Bernie Sanders’ “Our Revolution” back in 2016, it won’t be out of date, but you probably won’t read it this time, either.

The real growth industry isn’t in self-promotional campaign fodder, often distributed at rallies, consigned to the far reaches of voters’ bookshelves and then left, along with last year’s fashions, on the porch to be picked up by Goodwill. No, the big releases revolve, like everything else in America today, around Donald Trump. The buzz started strong with news-making books including Michael Wolff’s salacious and questionable “Fire and Fury” and Bob Woodward’s uber-sober “Fear: Trump in the White House.” Then the genre petered out, at least in terms of sales and surely in terms of impact. The publishing industry will have to find another way to save itself.

“A Very Stable Genius,” by Washington Post correspondents Philip Rucker and Carol Leonnig, unleashed more gossip from inside the asylum recently, but by this point, it feels like a drop in a bottomless bucket. Because even as sales flag, the cascade of volumes about the president keeps on flowing, one after the other, festooned with blistering subtitles, among them “How Trump’s Minions and Misfits Poisoned Washington” and “How Trump Embraced Our Enemies, Compromised Our Security, and How We Can Fix It.” Or, on the other side of the great divide, “Why the Democrats Must Not Win” and “How an Army of Bureaucrats Protected Barack Obama and Is Working to Destroy the Trump Agenda.” 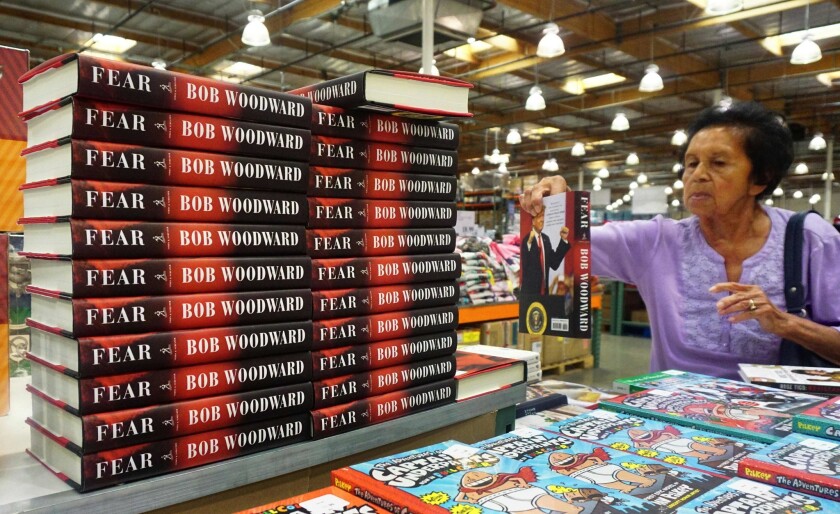 Bob Woodward’s “Fear” displayed at a Costco store in Alhambra.

As a group, they make reviewers — and the shelves of booksellers — groan, and, in truth, it is difficult to tell them apart. The more of them publishers churn out, the lower their individual or even collective power. It makes you wonder what could have led to this state of publishing affairs. Perhaps in our media-drenched age, there is little left to expand on. Perhaps those postwar classics established a genre of reporting — insider detail, crisp analysis — that newspapers and magazines adopted, leaving little room, and little reason, to put those elements between hard covers. Our news cycle does not assimilate 1,000-page-plus Odysseys of immersive journalism very well.

And yet, the accounts come. Difficult as it is to imagine that any reader has a thirst for more information about the 45th president, Trump will inevitably spawn even more books over the next several years. But most of the recent crop — only a few of them positive, notably (and predictably) Donald Trump Jr.’s “Triggered” — are outdated by the time they are published, forgotten once they are released.

In a way, that’s not news. Quick: Can you name one Clinton book beyond David Maraniss’s “First in His Class,’’ about the president’s early years, and “Primary Colors,” one of the last important campaign books, which was a novel? Can you recall a single Bush book beyond Jon Meacham’s “Destiny and Power,” which was about George H.W. Bush? (“C. Fred’s Story,” Barbara Bush’s account of the First Dog, and “Dear Socks, Dear Buddy,” Hillary Clinton’s book about the First Pets, don’t count.)

Those who once worried that, in the digital age, the historians of the future would have few permanent resources to mine can now breathe more easily. Trump has rescued us from that future crisis. There will be plenty of written material to examine, and posterity will have a trove of printed books about this strange administration. Good luck to the historian who wants to mine even a fraction of them.

To be fair, there are some worthy entries in the Niagara of Trump books: Andrea Bernstein’s “American Oligarchs,” published this month, dealing with “The Trumps, the Kushners, the Marriage of Money and Power,” is written with skill and care and has a good chance of standing the test of time. “A Very Stable Genius” may avoid the remainder table longer than most of its competition in the Trump literary Olympiad.

Happily, there is a more promising category in spinoff books — the type that do not linger on the personality or policies of the president but gesture toward history or bigger ideas. “The Impeachers,” Barbara Wineapple’s authoritative and approachable account of Andrew Johnson’s travails, joins Michael Les Benedict’s 1973 “The Impeachment and Trial of Andrew Jackson” in the canon. Harvard Law professor Lawrence Lessing’s “They Don’t Represent Us,” published only two months ago, asks important questions about American democracy and offers a series of concrete proposals for mending it. Another recent volume of note: “The Stakes,” by Robert Kuttner, which examines how Trump has changed the presidency, our politics and our expectations of civic life.

But for the Trump-weary of all persuasions, the best reading regimen might be to look to another age. I am particularly drawn to the political novelsof Anthony Trollope (1815-1882). There are six of them, which should get you through the caucuses, primaries, conventions, debates and all the commentary spewed before Election Day. The great advantage of these books is that in as many as 848 pages (the length of “Can You Forgive Her?” in the Penguin Classics edition), not much of anything happens. If there ever were a tonic for our age, that would be it.

Alert of the week

His in the political department

Political literature is a sorry state

I love to learn about books