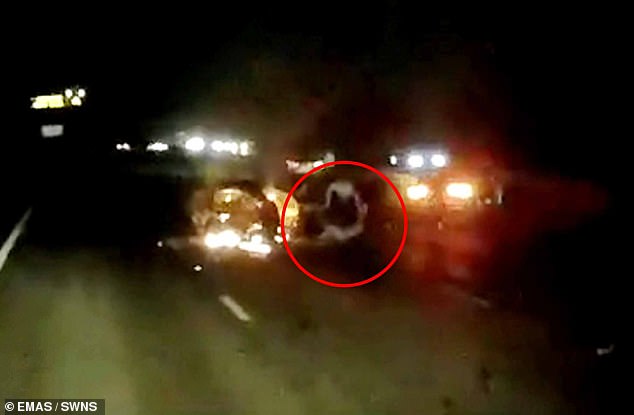 Mr Rastrick, of Chesterfield, Derbyshire, leapt out of his cab and sprinted towards the burning car before pulling terrified Pari Mistry, 27, out of her vehicle

Lorry driver who pulled a woman from a burning car moments before it exploded has been given a bravery award.

John Rastrick, 65, was driving his HGV northbound on the M1, just south of Leicester, when two cars crashed just yards in front of him.

Dramatic dashcam footage showed one of the cars engulfed in flames in the middle lane while the other car had struck the central barrier.

Mr Rastrick, of Chesterfield, Derbyshire, leapt out of his cab and sprinted towards the burning car following the smash at 5.43pm on January 17 last year.

He managed to yank open the driver's door and dragged terrified Pari Mistry, 27, to safety moments before the petrol tank exploded.

In recognition of his life-saving actions, the crew who attended the scene presented him with an East Midlands Ambulance Service (EMAS) Bravery Award.

Recalling the incident, Mr Rastrick said: 'I saw her car spin two or three times when another car collided with her and her vehicle immediately set on fire.

'I just knew at that moment that there was no one else around to help and I had to do what was right.

'I hoped to God that whoever was in the car had got out, but when I saw Pari in there, I put all my fears aside and tried to pull her out.'

In recognition of Mr Rastrick's life-saving actions, the crew who attended the scene presented him with an East Midlands Ambulance Service (EMAS) Bravery Award (pictured, with Pari Mistry)

The pair have remained in contact since the crash and are now friends.

Mr Rastrick added: 'To know how far Pari has come in just one year since the accident is so amazing to see.'

Mrs Mistry, of Leicester, had been on her way to meet her husband for dinner when she collided with another car.

She spent four days in a critical care unit at Coventry and Walsgrave General Hospital with a skull fracture.

There she underwent an eight-hour operation on her skull and then had to learn to walk and talk again.

However, she is now on the road to recovery and was delighted to have the opportunity to thank John for saving her life.

She said: 'I don't remember much from the incident, apart from what I have been told but I know I immediately thought I was going to die.

'For my family, this incident was especially hard as we are all really close.

'With their support and help, I was able to persevere with my recovery and say thank you to John in my own words.

'Being able to say thank you to John and the crew for what they did means so much, I never thought I would get the chance.

'John didn't just save my life. He saved the lives of my mum, dad and brother too.'

Congratulations, thanks for saving her life

What a brave man

Congratulations to u guy

not here in nigeria

He is a good man for saving u

I just new at the moment

He really deserves the award

all thanks to God through him

A Wild Albino Camel And First Of Its Kind, Caught On Camera In China (photos) Read More

15+ Weird Moments Were Caught On Camera, And They Left Us Speechless Read More

Poorer Countries To Get 120 million $ For Coronavirus Tests, WHO Says Read More