Why Cancer Kills In Nigeria

Why Cancer kills in Nigeria

First of, what is Cancer?

Cancer is the uncontrolled growth of abnormal cells in the body. Cancer develops when the body's normal control mechanism stops working. Old cells do not die and instead grow out of control, forming new, abnormal cells. These extra cells may form a mass of tissue, called a tumor.

What are the treatments for Cancer?

*Radiation Therapy is a treatment for cancer that a doctor may recommend at different stages. In the early stages, radiation therapy can help reduce the size of a tumor before surgery or kill remaining cancer cells afterward.

The major types of cancer are carcinoma, sarcoma, melanoma, lymphoma, and leukemia. Carcinomas -- the most commonly diagnosed cancers -- originate in the skin, lungs, breasts, pancreas, and other organs and glands.

Lymphomas are cancers of lymphocytes.

Leukemia is cancer of the blood.

Sarcomas arise in bone, muscle, fat, blood vessels, cartilage, or other soft or connective tissues of the body, and they are quite uncommon. 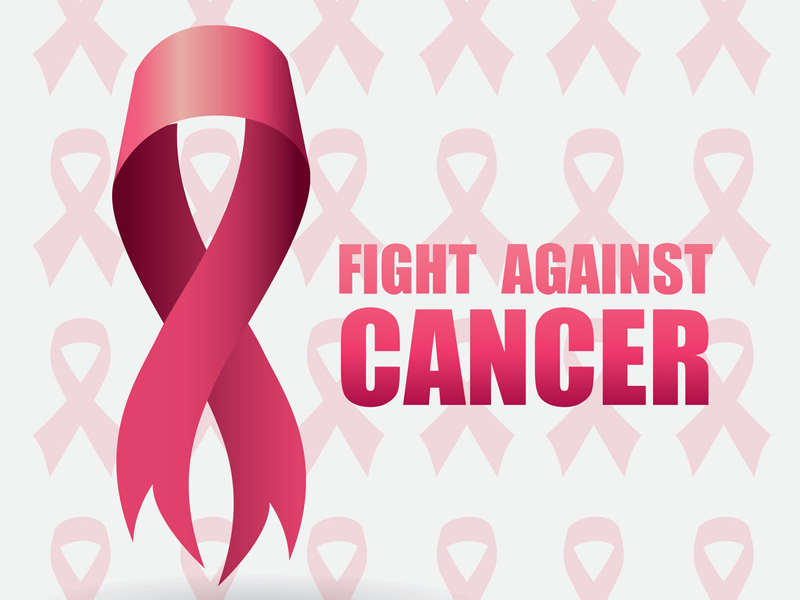 How do you know when you have Cancer?

Some cancers develop completely without symptoms, the disease can be particularly devastating if you ignore symptoms because you do not think that these symptoms might represent cancer.

Below are the symptoms of cancer with explanations so you won’t get confused.

These symptoms usually represent simple infections such as bronchitis or sinusitis.

They could be symptoms of lung cancer or head and neck cancer. Anyone with a nagging cough that lasts more than a month or with blood in the mucus that is coughed up should see a doctor.

A doctor always should investigate blood in your stool

Hemorrhoids frequently cause rectal bleeding, but because hemorrhoids are so common, they may exist with cancer. Therefore, even when you have hemorrhoids, you should have a doctor examine your entire intestinal tract when you have blood in your bowel movements.

With some individuals, X-ray studies may be enough to clarify a diagnosis.

Colonoscopy is usually recommended. Routine colonoscopy, even without symptoms, is recommended once you are 50 years old.

Sometimes when the source of bleeding is entirely clear (for example, recurrent ulcers), these studies may not be needed.

Anemia is a condition in which people have fewer than the expected number of red blood cells in their blood.

Anemia should always be investigated.

There are many kinds of anemia, but blood loss almost always causes iron deficiency anemia. Unless there is an obvious source of ongoing blood loss, this anemia needs to be explained.

Many cancers can cause anemia, but bowel cancers most commonly cause iron deficiency anemia. Evaluation should include endoscopy or X-ray studies of your upper and lower intestinal tracts.

Most breast lumps are noncancerous tumors such as fibroadenomas or cysts. But all breast lumps need to be thoroughly investigated for the possibility of breast cancer.

A negative mammogram result is not usually sufficient to evaluate a breast lump. Your doctor needs to determine the appropriate X-ray study which might include an MRI or an ultrasound of the breast.

Discharge from a breast is common, but some forms of discharge may be signs of cancer. If discharge is bloody or from only one nipple, further evaluation is recommended.

Most men (90%) with cancer of the testicle have a painless or uncomfortable lump on a testicle.

Some men have an enlarged testicle.

Other conditions, such as infections and swollen veins, can also cause changes in your testicles, but any lump should be evaluated.

Hematuria or blood in the urine can be caused by urinary infection, kidney stones, or other causes.

The blood could be visible by the naked eye or might be found on a urine examination (microscopic hematuria).

For some people, it is a symptom of cancer of the bladder or kidney.

Any episode of blood in the urine should be investigated.

Hoarseness not caused by a respiratory infection or that lasts longer than three to four weeks should be evaluated.

Hoarseness can be caused by simple allergy or by vocal cord polyps, but it could also be the first sign of cancer of the throat.

Unusual vaginal bleeding or bloody discharge may be an early sign of cancer of the uterus. Women should be evaluated when they have bleeding after intercourse or bleeding between periods.

Bleeding that comes back, that lasts two or more days longer than expected, or that is heavier than usual also merits medical examination.

Postmenopausal bleeding, unless expected on hormone therapy, is also worrisome and should be evaluated.

Usually, the evaluation will include an endometrial biopsy, in which a doctor takes a small tissue sample from inside the uterus for testing.

A Pap smear should be part of every woman's routine medical care.

These are common symptoms of daily life, often related to food intake, muscle spasms or strains, but they also can be seen in ovarian cancer.

Ovarian cancer is particularly difficult to treat, because it is frequently diagnosed late in the course of the disease.

The Cancer Society in some countries and other organizations have been trying to make both patients and physicians more aware and consider this diagnosis if the classic symptoms are present.

I had to take some symptoms off, due to the size limit of this article.

I’m in no way trying to instill fear in your hearts, keep living your life the way you are, the only thing i will advise you to do after reading this article is that if you are experiencing any of these symptoms, you should pay a visit to your doctor.

NOW TO THE MAIN POINT OF THIS ARTICLE..WHY DOES CANCER KILL IN NIGERIA

According to the figures released by the World Health Organization(WHO) on a World Cancer Day, it is observed that many cancer cases are diagnosed too late. With over 8.8 million cancer deaths recorded globally yearly, out of which an estimated 80,000 are Nigerians, the World Health Organization, WHO, has called on specialists to pay special attention to early diagnosis of cancer, because most oncological diseases are curable, if discovered early.

According to WHO statistics, over 100,000 Nigerians are diagnosed with cancer annually, and about 80,000 die from the disease, averaging 240 Nigerians every day or 10 Nigerians every hour, dying from cancer. The Nigerian cancer death ratio of 4 in 5 is one of the worst in the whole world. The data at hand also shows that cervical cancer which is virtually 100 percent preventable kills one Nigerian woman every hour, breast cancer kills 40 Nigerians daily while prostate cancer kills 26 Nigerian men daily. These three common cancers alone, kill 90 Nigerians daily.

Cancer is responsible for almost 1 in 6 deaths globally. More than 14 million people develop cancer every year, and this figure is projected to rise to over 21 million by 2030. 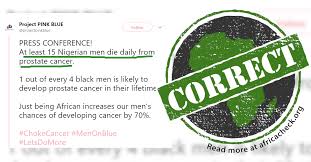 According to the WHO criteria, cancer is regarded curable if the patient lives for more than five years after the disease has been identified. High mortality rates are usually observed among third and fourth-degree cancer patients.

“Diagnosing cancer in late stages, and the inability to provide treatment, condemns many people to unnecessary suffering and early death. By taking the steps to implement WHO’s new guidance, healthcare planners can improve early diagnosis of cancer and ensure prompt treatment, especially for breast, cervical, and colorectal cancers. This will result in more people surviving cancer. It will also be less expensive to treat and cure cancer patients,” said the Director of WHO’s Department for the Management of Non-communicable Diseases, Disability, Violence and Injury Prevention, Dr. Etienne Krug.

Lack of awareness is one of the major reason Cancer deaths occur. I personally, have experienced a scenario where someone slept and didn’t wake up, an autopsy was conducted and it was discovered that the lady died from a 100% preventable cervical cancer. 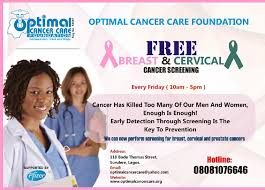 Religion is another reason, most Nigerians due to their beliefs experience symptoms of diseases but do nothing to prevent it, they refrain from self medicating even,(of course self-medication is bad, my point is that they won’t even take drugs like Panadol/Paracetamol), they don’t go for check ups with their Doctor(if they even have) because of what they believe.

With one love we can fight it

I hate this sickness

Cancer is the uncontrolled growth of abnormal cells in the body. Cancer develops when the body's normal control mechanism stops working. Old cells do not die and instead grow out of control, forming new, abnormal cells. These extra cells may form a mass of tissue, called a tumor.

Cancer is the uncontrolled growth of abnormal cells in the body. Cancer develops when the body's normal control mechanism stops working. Old cells do not die and instead grow out of control, forming new, abnormal cells. .

May God keep such kinda disease far away from us

Humm so educative and interesting

Really, people need to pay more attention to their health

A very wonderful and helpful article

I hate to sick

How I treated, cured diabetes of 15 years Read More