Victim's brother: I'm speechless about  sentenced Gregory and Marcia Abbott to 1 month in prison for paying $125,000 to falsely boost their daughter's ACT and SAT test scores as part of the college admissions scam.

The Abbotts both pleaded guilty in May to conspiracy to commit fraud. Prosecutors had asked that they be sentenced to 8 months in prison with a year of supervised release and a $40,000 fine.

Tuesday's sentence also includes 250 hours of community service, a $45,000 fine and one year of supervised release for each. 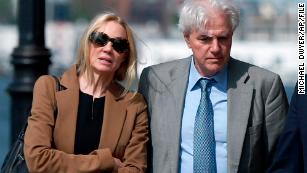 Marcia and Gregory Abbott leave federal court after they pleaded guilty to conspiracy charges on May 22, 2019.

The month-long sentence is similar to those given to other parents who participated in the test-cheating aspect of the college admissions scam. The actress Felicity Huffman was sentenced to two weeks in prison and Gordon Caplan was sentencedto one month in prison for similarly facilitating cheating on their children's standardized tests.

Those parents who paid to get their children into prominent universities under the guise that they were recruited athletes have been sentenced to longer prison stays. Stephen Semprevivo and Devin Sloane were each sentenced to four months in prison for paying these bribes.

Agustin Huneeus Jr., who participated in both the test-cheating scheme and the athletic recruitment scheme, was sentenced to 5 months in prison.

I am confuse 1 month for cheating

One month is too small

They are in prison

Lol no be small thing

One month or one year

Lol, so paying bribe is a crime

Lol it's not love

That's so so cool for them

Is it just a month or a year

Only one month cheating

Couple who paid to cheat

People should learn to do things aright

Such attitude is vry bad

is too much  for one  month