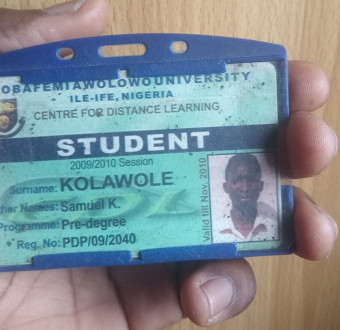 A Nigerian photographer identified as Kola Onifoto has taken to his Facebook to share his experience in the hands of a lecturer who duped him of N200K for admission into Obafemi Awolowo University (OAU).

According to him, it was in 2010 when he paid the lecturer to get admission into OAU.

The lecturer, Fowowe, reportedly made him spend 7 months on a fake pre-degree course and also stopped him from writing exams with other students.

According to him: “My own, a lecturer collected close to 200k from me in 2010 for admission in OAU after spending 7 fake months in pre-degree.. Bastard never registered me, I was just attending classes, exam days he will tell me not to go. Na when pre-degree end my eye clear say I don enter one chance.”

Is this a job or what

Man fraud star get out

Why won't you write exam did he use jass on you

The man try no be small

What a shame to hear about this.

If the student paid for it then you give him according to agreement or return his money.

he should be charge to court

Is this a job or what
(Quote) (Likes)
Erhiano Wizzy

That lecturer needs to go to jail

No more self respect

He need to be sued

The Key To Success Read More