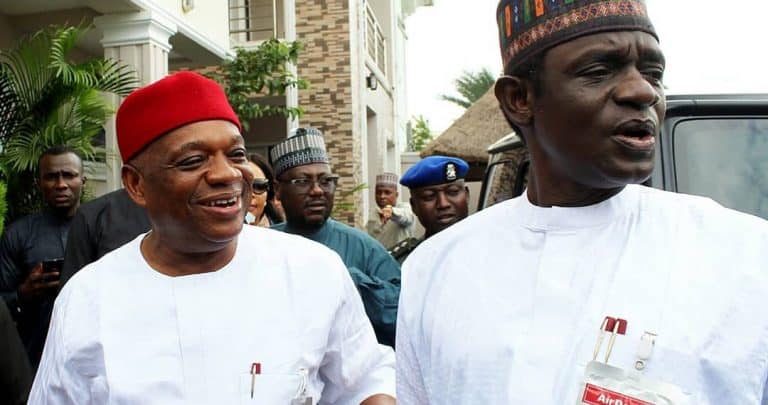 The details of the meeting between the members of the SouthEast caucus of the All Progressives Congress, APC, in the National Assembly, and the interim National Chairman of the party, Mai Mala Buni have emerged.

POLITICS NIGERIA reports that the caucus led by the Chief Whip of the Senate, Dr Orji Uzor Kalu, paid a solidarity visit to the residence of the Yobe Governor in Abuja on Monday.

Speaking on behalf of the caucus, Senator Kalu said the caucus came to show their support and pass a vote of confidence on the leadership of the Buni-led committee. The lawmaker also extolled the leadership qualities of the committee and called on him to promote transparency in the party’s activities.

“It is easier to win an election with popular candidates. It is difficult to win elections when people are imposed. We should avoid the imposition of candidates. You are a very experienced party administrator and governor of the state and you are also very experienced in handling party matters. The caucus of the South East APC want to congratulate you, to enjoin other party members and to reassure you that we are going to work with you.”

The former governor of Abia State reassured South East APC’s commitment to improving its performance in subsequent elections in the zone.

“I want to specially congratulate and to tell you that we are solidly behind you and we shall support you in your quest to do everything transparently. It is important to have transparency in our party congresses. This will make the party have a big footing in the area. We assure you that we, from the SouthEast, shall do better in the next election than we did in past election. We believe that with your honest leadership, the party will go to further heights. How I wish you are not the governor of a state. We shall not be looking for another national chairman because we have trust in you and I know you very well and even your capabilities.”

Governor Buni thanked Senator Kalu for the visit and restated the committee’s willingness to work with the South East caucus. He extolled Kalu’s efforts and contributions to the party’s growth and urged him to continue his good work for the party.

The Yobe governor also called on women to take up the responsibility of contesting in elections rather than waiting to be given such position.

Other lawmakers who spoke were Chinedu Ogah of Ezza South and Princess Miriam Onuoha of Okigwe senatorial zone.Details of meeting between Orji Kalu, APC chairman, others emerge.

A is centered on edo elections

All their meetings na how to enrich themselves

Keep walking before coro jam u

Good to hear that

This man really embezzled money  in his regim in Abia state

The this are the matters

Women should stand up and join politics

Everytime meeting nothing come out